Reaching into the true essence of morality and ethics was yet another day packed with perspective transforming lessons and activities from Dr.Amani Al Bedahi who outlined the true nature of virtues and values through her dynamic lecture on Critical thinking. 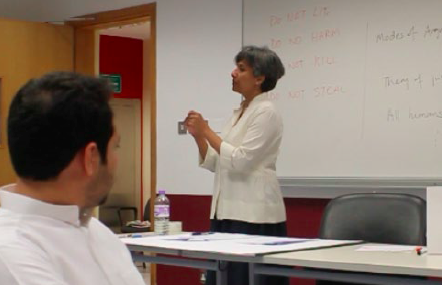 Triggering self-awareness through mind puzzling and perplexing debates it was made clear that they needed to be weary of the intention behind their values and actions in order to avoid walking into labyrinths of conflicting matters.

“In every moral action there is intention and Moral judgments are cognitively built from a logical judgment, Respect is more of a subjective statement rather than a principle of society.”

After warming up with discussions and debates on different theories in philosophy regarding what can be generally seen as a moral act and an ethical act. She questions the Protégés,

“If an act is sanctioned by society, is it depicted as being moral or not ? “

Steering their minds to dig into a deeper understanding of what is universally considered as the greater good for society, they learnt how ethics can bridge the gap in the loop between morality and society.

Dr.Amani sealed the day with a mind enriching game when she requests the protégés to assemble into teams and to come up with a set of principles that can be used for a successful society and asks the students to create their ideal world using four basic human rights that could act as pillars for their Utopia.